There are a number of things wrong with the Brittney Griner case, now in Russia. The first is that there is a definite bias (by our mainstream press and our US politicians) against anything Russia does right now. The press has raised a question as to whether or not Griner is guilty at all. According to CBS News:

“WNBA star Brittney Griner pleaded guilty in Russia on Thursday to drug possession and smuggling charges, telling a Moscow court she brought marijuana into the country by accident.

Griner was arrested at a Moscow airport in February after Russian officials claimed she had cannabis oil in her luggage.”

Griner has said she packed the oils by accident, not realizing they were in her luggage. That is believable. And that could happen to anyone. What ever happened Griner seems to be used for political reasons. Again from CBS News:

“Russian media had speculated that Griner could be a part of a prisoner swap similar to the one U.S. and Russia arranged in the spring, exchanging former Marine Trevor Reed with pilot Konstantin Yaroshenko, who was jailed years ago on drug smuggling charges.”

Regardless, no one deserves to be treated as Griner has been. Such drug laws should be obsolete in this day and age. Whether in the US or some dumb ass country as Russia, the time to punish people for drug offences should be in the past, now and forever! 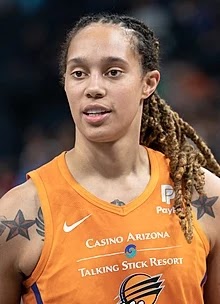