My phone seems to take me to Fox News a lot and that is as problem for me. They seem to focus a lot on Alexandria Ocasio-Cortez, and in fact they seem obsessed with her. Then they seem to like to create controversial issue where they really don’t exist at all.
Last week, Rep. Dan Crenshaw, R-Texas attacked Rep. Ilhan Omar, D-Minn for saying she said something outrageous about 9/11. He claimed Omar was characterizing the 9/11 terrorist attacks as “some people did something.” She was addressing a crowd over discrimination that Moslems go through here in the US. Her remarks were taken out of context and he made a mountain out of a molehill. I think for the average person that comment is nothing terrible. But Crenshaw claims otherwise. He is a very conservative Republican and he has gotten a lot of attention from Fox News.
AOC came to Omar’s defense and that immediately caused Fox News[1] to pull out all the stops:

They act like people all over the country are up in arms about this, but the reality is that they are focusing on criticism from conservatives only. If anything, the reaction to Omar’s comments prove just how prejudice some Americans are over Moslems. This whole controversy would have never come to light if Omar was not a Moslem and a Democrat.
From Yahoo News:

Beright
send her and both of her radicalized co-freshman with her, oh AND HER BROTHER HUSBAND past our borders forever.

NOCANFINDNAME
Pack up Omar and her hajib and send them to .

12gauge
Omar is wrong, she is not an American she is a Citizen

paul
Are you sure?
Reply
Who Dat? Very good point.
She didnt even become a naturalized citizen until the year 2000.
Up until 1998 she was a Somali refugee living in a refugee tent city in .
With that unfortunate background theres no way she can see ANYTHING from an "average American" point of view….
……
E
Can you imagine the mainstream media reaction if a white congressman or congress woman described the assasination of MLK as someone did something to some man...?

IrishAmericanPsycho
Or if a non-white person lied and said thousands were dancing in the streets celebrating the bombing?
Reply

Frank J
American's don't marry their brothers...
Anna
SHE SHOULD RESIGN! THE COMMENT SHE MADE SHOWS EVERYTHING ABOUT HER!
Reply
edward
Traitors both to the oath they swore To protect and defend the US Constitution.

It doesn’t take long to see by these comments how prejudice and narrow minded these conservatives, who left these remarks, are. They have written comments that only could apply to a Moslem and there is no respect for Omar at all. These are probably the people that Fox News claims that AOC has “faced mounting criticism.”
Fox News then said of AOC:

“That prompted Ocasio-Cortez to defend her ally, going after the congressman for not co-sponsoring the 9/11 Victim’s Compensation Fund.
“In 2018, right-wing extremists were behind almost ALL domestic terrorist killings. Why don’t you go do something about that?” Ocasio-Cortez told Crenshaw….
….That sparked an avalanche of outrage, many pointing to Crenshaw’s service as a Navy SEAL in the war in as well as his sacrifice.”

Then Fox News provides their own examples of tweets in defense of Crenshaw. For the most part, it seems that Crenshaw was a Navy Seal and fought in . Therefore he is above criticism. Because he served in the imperialist army, taking people’s sovereignty away from them and killing and pillaging the people of , he is a brave hero who is still easily offended and should not be subjected to such offenses.
✔@nataliejohnsonn

AOC implying @DanCrenshawTX, who served combat tours in both and (where he lost an EYE) in the wake of 9/11, hasn’t done enough for the victims of September 11 terrorist attack is astounding, though not shocking….
Ryan Saavedra
✔@RealSaavedra

Crenshaw is a decorated war hero, who, as a Navy SEAL, lost his eye fighting terrorists in Afghanistan and earned 2 Bronze Stars (one with Valor), the Purple Heart, and the Navy Commendation Medal with Valor

Crenshaw maybe brave on the battle field, but here at home, in his political niche, he is a big cry baby who is easily offended by non-issues. He needs to get over himself. The right-wing trolls who follow him not only need to get over themselves, but they need to lose their narrow minded prejudices. 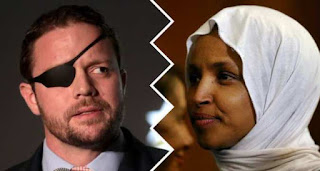