By SJ Otto
A song years ago, called The Way, by Fastball sang; “An exit to eternal summer slacking.” Well, if they needed a role model for slacking, Ron Estes is their man. Until just recently he has skipped public forums, refused debates, and ran a campaign that says: “I win by default.”
That seems to be his motto. He’s the Republican so he is going to win.
And Estes is a man who doesn’t believe in working too hard for that office. While his opponent, James Thompson, Democrat, is leaving no stone unturned, Estes is out fishing. Thompson has made all the debates and forums. He has been out meeting people. And he is just now starting to run commercials.
Estes, on the other hand has spent a lot of Republican slush money, from all their bribes and kick-backs, on lots and lots and lots of ads. And he’s gone negative, telling people that Thompson is running on behalf of Nancy Pelosi, who today is no longer relevant to anything in congress, so they can tax the middle class. He also mentions his opposition to Obamacare (Affordable Care Act) which has suddenly grown much more popular since the Republicans started ripping it apart. Some people may not want Obamacare repealed. After all a lot of working poor people don’t favor dying early because they lack health care.
And Estes has avoided telling us how closely he has worked with our governor, Sam Brownback. Brownback has endorsed Estes. So Estes plans to take those same failed economic policies that Brownback has forced on Kansas and try to apply them at the national level.


If you want an easy going politician who doesn’t plan to work too hard, Estes is your man. For the rest of us, let’s tell Estes we don’t need a slacker representing us. Oh…wait. He will probably be out fishing. As they say: “slackers gonna slack.” We can still vote against him, April 11 or earlier. 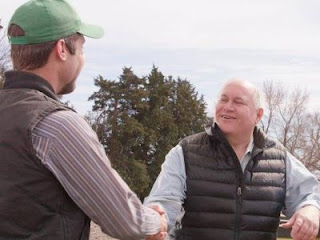 “What’s so bad about Sam Brownback!?” 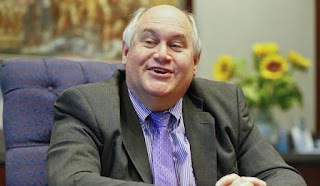 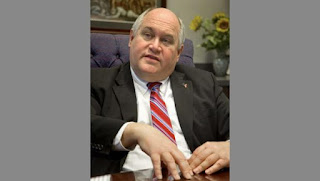 Pix by The Topeka Capital-Journal, estesforcongress.com. (The quotes are satire, not direct quotes.)
Posted by SJ Otto at 2:29 PM