It is unfortunate that Wichita, Kansashas a long history of artistic and political repression. That includes everything from the censorship of movies and plays (Mostly sexually suggestive subjects and nudity, but also anything to do with abortion, gay rights and at times political things as well).  is in the center of some of the most repressive conservative religious movements in the country, such as the Moral Majority, Christian Coalition and Godarchy. It is heavily Republican and as Hunter S. Thompson once said: "I believe the Republicans have never thought that democracy was anything but a tribal myth."

So it is no surprise that a group of young people, mostly members of Project Justice ICT have been targeted for harassment. As we see from our hometown The Wichita Eagle:

The Wichita Police Department is asking for the public’s help to identify people accused of committing crimes during recent protests.

Police posted photos of the people on Facebook on Wednesday. The individuals are wanted “on charges stemming from the ongoing investigations of illegal activity at demonstrations” July 30 and July 31, WPD officers said.”

Notice that the police have paid no attention to the man who tried to drive a truck through the crowd and then threatened them with a gun. The police haven’t lifted a finger to go after that guy. They don’t seem to care about that. And yet they accuse protesters of rioting, battery, vandalism, harassment and aggravated assault with a firearm.

This is all ridiculous. This country has supported protesters in both  and  who are way more destructive and disruptive, especially in  where protesters have lit people on fire and yet they pull out all the stops to prevent peaceful protests here at home.

has a long history of not respecting people’s political rights and once again we see that in practice. Hypocrisy is a way of life in . 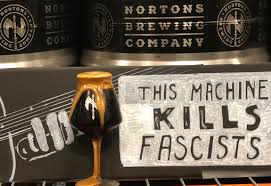