By SJ Otto
For many years now, Yoko Ono has been one of my favorite celebrities. I have taken a lot of ideas and inspiration from her. She is politically progressive, even though she is more anti-violence that I am. And she was once married to one of my favorite musicians and song writers of all times, John Lennon. I have also had some contacts with her over the last 20 years. So I took an interest in her health and welfare recently from an article posted in the New York Post: 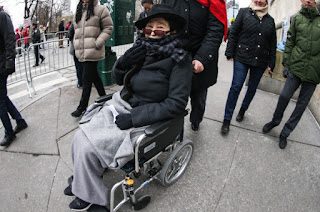 “Three years ago, when the National Music Publishers’ Association presented Yoko Ono with their Centennial Song Award, Sean Lennon pushed his mother onto the stage at Cipriani 42nd Street in a wheelchair — shocking some who didn’t realize the formidable avant-garde artist was incapacitated.
But in her signature shades, black leather jacket and white Panama hat, the widow of John Lennon didn’t seem to miss a beat when she began a short acceptance speech by ­addressing the elephant in the room.
“Thank you, thank you, thank you,” she said, clutching the award in one hand and a microphone in the other as Sean whispered to her about what was going on. “I’ve learned so much from having this illness. I’m thankful I went through that.”
While it’s not clear what “illness” she was referring to, Ono, now 87, is still ailing, requires round-the-clock care and rarely leaves her sprawling apartment in The Dakota, a source close to her staff told The Post. In photos taken at rare public appearances — including a women’s march in Columbus Circle last year and at a commemoration of John in Liverpool in May 2018 — Ono is confined to a wheelchair, or walks with great difficulty using a cane, often leaning on a caregiver or Sean for support.”

It is always hard to take, when we find out a friend, relative or someone we know is getting old and having a hard time getting around. But that happens. Our parents get old, as do our spouses brothers, sisters and friends. Getting old is a part of life. I can still remember pictures of John and Yoko together as they went to many places and got photographed going to all of those places they went. 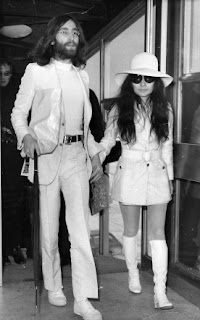 It was a several years ago that I posted a comment on a site run by Yoko Ono. It was a site about her and John Lennon. I quoted a line from one of Lennon’s songs as a part of my book. I used it because I was inspired by Lennon. As it turns out, I believe Yoko found it moving and she has been following me on Twitter and later on Google+ (until its demise). I have also had exchanges in other social media, such as the now defunct MySpace. There were a few times when she sent me some invites to her art shows in and I used to get some articles/news tips about her future events, from her for my blogs.
So I have learned to really appreciate Yoko. She had been a performance artist and I have found a lot of her ideas to be very interesting and inspirational. For a time I was doing performance art at the local club, Kirby’s, here in .
And let’s face it—she was the wife of one of my favorite musicians of all times—John Lennon. From my high school days to long after he died I enjoyed Lennon’s music, his lyrics and his comments to the press. He was one of my favorite celebrities. Of course he died long before I could approach him on social media. So it was really cool that I found it possible to approach Yoko. She was his wife. They were close. They seemed to be married for life. I have heard from some sources that Lennon got more conservative before he died. I don’t know how true that is, but Yoko seems very progressive even today. She has been involved in political actions promoting peace, even in recent times. Last year DW wrote this about Yoko:

“She is arguably the most hated woman in music history. Yet Yoko Ono is not only John Lennon's widow, she also stands alone as an artist. Her works spanning five decades are now on show in .
***
YOKO ONO: ART AND PROTEST
The Yoko Ono myth
The Japanese-American conceptual artist was at some point considered "the most hated woman in ," since she was believed to have contributed to the break-up of the Beatles. Public appreciation of Ono's work has evolved over time. John Lennon's widow has not only preserved his legacy, she has also pursued her own innovative artistic career over the decades.
***
Yoko Ono has over 2,000 square meters (around 21,500 square feet) and three floors of exhibition space in the Leipzig Museum of Fine Arts at her disposal. "Yoko Ono. Peace is Power" is the most extensive retrospective of the Japanese-American artist's work in to date. As curator, Ono's long-time friend and confidante Jon Hendricks has been on site to ensure that everything is set up in the spirit of the eccentric artist.”

She has had a rich life and we are all better off because if it.