By SJ Otto
Today I received a campaign brochure in the mail. It was an attack on our conservative Republican US Rep. Roger Marshall. I have no fondness for . But this brochure attacked him from the right, not the left. For example, it suggested that he supported the Rosie O’Donnell Summer Camp, a Global Warming Musical (with a picture of Al Gore) and he supposedly voted to fund “transgender plays.”
The ad calls him a “Fake Republican.” He supposedly “sided with Nancy Pelosi.”
For most of this stuff I could care less. I don’t get upset that a politician who was voted on by me and others supported gay plays or Transgender plays.  I’m not always in support of Nancy Pelosi, but my nostrils don’t flare up when I hear her name.
I really don’t believe that is a closet liberal or Democrat. The group responsible for this brochure is “Free Forever Pac, Not authorized by any candidate or candidate committee.” And for the record this was sent to “The Otto Household.” That includes only me. My wife never took my last name when we married. I have been registered as a Republican a few times, so that may explain why it was sent to me. There are a lot of other questions I have. I can assume by the tone of this brochure that it was meant to inflame the passions of a conservative person. I am not conservative. So I can’t tell who this is intended to help. It implies that is not really conservative. But that does not seem to be true at all. He is conservative and for that reason I have no reason to support him or vote for him. These accusations are not that easy to check on. They do give a few hyperlinks such as:

But those provided little help in finding the source for this brochures’ accusation.
I don’t have any sympathy for . I would love to see him lose that seat. But not to an ultra-right politician and those are the people this brochure was intended to support.
politics have gotten nasty and unfortunately there are no decent people (that I am aware of) running who can benefit from the loss of such ass holes as . 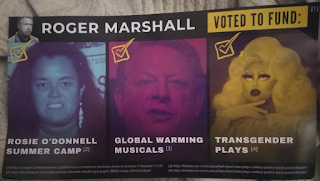