Black Lives Matter May Be the Largest Movement in U.S. History—including here in Wichita

By SJ Otto
All across the country, the Black Lives Matter marches have kept up the momentum. As with other major cities, that has been the case here in . According to Larry Buchanan, Quoctrung Bui and Jugal K. Patel, of the New York Times, The Black lives matter movement may be the largest movement in US History. Here in , political activist are doing their part to make that possibility a reality. On July 11, Bill Anderson photographed a Black Lives Matter march that he took part in. As Bill Anderson said on his Facebook Page:

“Great group of people.” It was funny to see that a bunch of old, out of shape, maskless white racists came out to the courthouse to protect the statchews... they got punked... swallowed some bullshit rumors and just looked pathetic ignorant and foolish.” 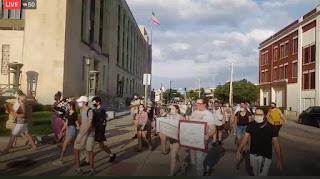