I'm watching TV and suddenly a news story comes on about the new "oversight board" board that Facebook has just put together. What it really is: a censorship board to decide what content it's users and followers can follow. Here is what their board does according to CNBC:

"The oversight board will govern appeals from Facebook and Instagram users and questions from Facebook itself, although it admitted it will have to pick and choose which content moderation cases to take due to the sheer volume of them.

The board will receive cases through a content management system that is linked to Facebook’s own platforms. They will then discuss the case as a group before issuing a final decision on whether the content should be allowed to stay up or not."

One thing they always bring up, and they did while talking to a conservative unhappy with Facebook censorship, is that Facebook is a private company. And that is a magic word, here in capital land. They are not controlled or beholden to anyone. They are not controlled by or responsive to the public. They can't be held accountable. They are a mega corporation run by a faction of the 1 percent who own the and they own the people to a large degree. In other words a bunch of corporate fat cats now try to run our lives for us. They decide what we can and can not discourse in the public discourse. All this, thanks to their corporate watchdog, Facebook.

An example of their corporate dominance are my two blogs. One is for Democratic Socialist and the other a Marxist blog. Both are prohibited from posting any links to any articles. The reason is that they violate community standards. And what does that mean? They won't say. I have asked them and they won't respond to me. I've complained about this and they won't discuss it with me. There is no place to dispute their decisions. They are in fact, "GOD of the internet."

Facebook is one of the greatest dictatorships to develop since Nazi Germany. Anyone who thinks this is going to remain a free forum of ideas is fooling themselves. capitalism is not, and never has been a bastion of free speech. Facebook is just the latest example. We have it for a while, then someone has to clamp down on it to make sure nothing happens that will disturb the system.

Take for example, January 6 of this year. Many liberals, especially Democrats are unhappy that conservative groups were able to use Facebook to organize against the capital, based on the lie that President Donald Trump actually did not lose the election. For example Democrats made the following accusations about Facebook according to CNBC:

"House Democrats are demanding answers from Facebook on how it targeted ads for gun accessories next to misinformation about the election and news about the Jan. 6 riot at the U.S. Capitol.

In a letter sent to Facebook CEO Mark Zuckerberg on Monday, 23 lawmakers on the House Energy and Commerce Committee asked how Facebook makes sure weapons-related ads are not targeted in ways that could harm public safety. The lawmakers also asked whether companies who advertise on Facebook are notified when their ads are placed next to misinformation or violent content."

These Democrats are all hypocrites. Not long ago they all rallied in support of people doing similar things to the government of . Those protest have been violent, destructive and people have been hurt. Now that we have the same kind of protest here in the , our leaders want to shut it down. "We don't want that kind of democracy in our own country." This country is all for democracy: WHEN IT IS IN SOME ELSE'S COUNTRY.

Facebook has some actual "human rights activists" on their censorship board:

"The members are a globally diverse group with lawyers, journalists, human rights advocates and other academics. Between them, they are said to have expertise in areas such as digital rights, religious freedom, conflicts between rights, content moderation, internet censorship and civil rights."

Any real human rights activist would never serve on such a board. The same goes for journalists. It is a board to curb people's rights. What kind of activist or journalist would really do that? The answer is "phony ones."

Facebook, the main media monopoly, will now control debate. It will control it absolutely and all powerfully. No power in this country can debate against the great media monopoly Facebook. We will now get a taste of REAL US democracy—just enough free speech to convince people they are free—then they clamp down on anyone who tries to rock the boat or change anything. It is as phony as a $3 bill. 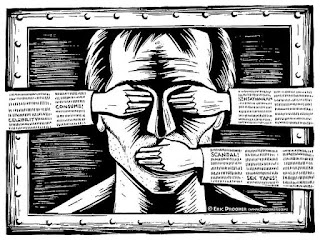