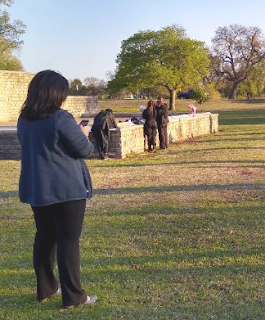 A few dozen people met at yesterday for a vigil to honor those who have died from police killings. The crowd was mostly young people under 50, yet there were a few older folks, such as myself,[1] there.

The weather was fine, with plenty of sun shine, although, just a little chilly. The event was mostly conducted by Aisha Duggins and Haley Simon. The only TV station I saw there was KAKE TV. Some of the information I used for this story come from KAKE TV.

One of the two MCs read a list of names of people who have died at the hands of police.

They include George Floyd, the subject of a court case against Police Officer Derek Chauvin,[2] some of the more recent victims such as Daunte Wright. The Chauvin—Floyd court case begins wrapping up today.

“I just really wanted to show that I care about the lives that are being destroyed in front of us,” Haley Simon told a KAKE TV reporter.

There were plenty of candles handed out to make sure everyone in attendance had one. While this event was the only one in the area, other such vigils were held across the country. In Hollywood California Hundreds of people gathered for a candlelight vigil, Saturday, to demand justice for two people shot and killed by police in recent weeks: 20-year-old Daunte Wright and 13-year-old Adam Toledo.

A similar vigil was held in New Haven Connecticut to honor the victims of police brutality and violence. And not long ago in Belchertown , Black Lives Matter vigil was held.

So the Sunday Evening event was part of a nation wide effort by people, black, white and other colors, who are sick and tired of police shooting and killing unarmed people. 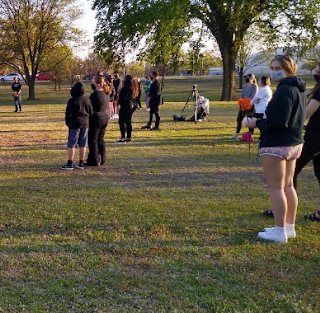 [1] As the weather clears up and the Covid virus scare wanes, I plan to make a lot more of these events. More of them are sure to be held has the factors mention before subside. As a political activist and writer, it is my duty to get out and report on what is happening in this area, as well as taking part in these political events.

[2] This case will go to the jury within days. If Chauvin is exonerated of allcharges, we can expect major protests, rioting and just plain outrage over such a miscarriage of justice. While the evidence of unnecessary brutality is overwhelming, a lot of adults are afraid to charge police with any wrong doing. There are a lot of white people, especially old white people, who seem to believe the police can never do any wrong. Proof of this fear is present in recent Grand Jury cases where juries have exonerated cops who are obviously guilty of murder, such as Eric Garner's case.