By SJ Otto
At least a few times a week we hear of “The U.S. opioid epidemic.” The news is full of scary statistics, with staggering death tolls. Some news outlets claim this is one of the deadliest drug epidemics since the 1960s. But as with the crack cocaine epidemic of the 1980s and early 1990s, not all the news we got was accurate. If we could believe all the hype and hysteria the mainstream news media fed us, at times we should have seen the country fall apart with so many people using these dangerous drugs. But America has endured from one drug epidemic to the next.
What is being called the “U.S. Opioid Epidemic” should really be called the “fentanyl epidemic.” With all the deaths that are being reported, most are attributed to street drugs mixed with fentanyl. The latest celebrity to die from fentanyl was Prince. The singer was using the common painkiller Vicodin when, unbeknownst to him, it was laced with fentanyl. The obvious conclusion is that he bought bootlegged Vicodin and it was laced with fentanyl. Police are finding that drug all over the streets, even in cocaine.
According to the National Safety Council, “Over 42,000 Americans died of opioid overdose in 2016, and government and public health officials are scrambling to find effective ways to reverse this frightening trend.” Such death statistics are constantly thrown at us by the mainstream news media. But what seems to be coming across more and more often is the fact that fentanyl is largely responsible for many of these deaths.
Fentanyl is a synthetic opioid that is supposedly cheap and easy to make. It is real powerful and is added to all kinds of street narcotics to boost their potency. The problem with this drug is that it is extremely potent.

According to Wikipedia, “fentanyl is about 75 times stronger than morphine for a given amount. Some fentanyl analogues may be as much as 10,000 times stronger than morphine.” Street heroin, in the past century, has always led some people to die from overdoses. For a regular dose of heroin to a non-addict is usually about half a grain. An addict will need several grains. That is a really small amount. For the same amount of fentanyl for the non-addict and addict, to get the same affects as heroin would require amounts that are no more than specs. A spec of salt or a single salt crystal would be the amount of fentanyl an addict might need to get high. It would not take much more than that to kill a person, addict or non-addict.

In the last few decades heroin has been sold in powder form, either in grams or “spoons” or “spoonful.” Recently some heroin has been stamped into pills. But the drug is almost always diluted or cut with other powders to stretch it out and make it appear as if the buyer is getting way more than they really get. Mostly milk sugar and quinine are used to stretch the heroin out. In the past, these powders have usually range from 10 percent to one percent heroin. So the user puts as much as a quarter gram, half or even a whole gram, when in reality the heroin is no more than a few pinches mixed with a lot of non-active powder. Some of the heroin today may be more potent and cheaper than in the past. The danger comes when a user buys heroin that is way more potent than usual. Other factors can contribute to an overdose, such as being drunk when shooting up. Alcohol and heroin are a deadly combination and should always be avoided.
In the case of fentanyl, the drug is so potent it almost has to be cut to prevent an overdose. And because it is so potent, it takes just a little too much, in a powder, to kill a person. It’s hard for the user to really understand how much of the drug they are using, especially when mixed with heroin, fake pharmaceuticals and non-narcotics such as cocaine.
The whole idea that doctors are the culprits, because they are writing too many prescriptions and luring people into addiction is ludicrous. Supposedly, according to recent news reports, people run out of their prescriptions and then head for the nearest heroin dealer. There are a lot of holes in this scenario. Overall this nation needs to be looking into stopping fentanyl and needs to stop wasting time chasing doctors who write too many pain killer prescriptions. There are plenty of people who need legitimate prescriptions for pain killers. There is no need to insist that the average person will become a heroin addict simply because he or she has a prescription to a common pain killer, such as Vicodin or Lortab. Such opioids are relatively harmless when prescribed for pain. We do need to spend public funds on drug rehabilitation for people who have serious problems or for addicts who want to quit. Funding for prevention also makes sense. What we don’t need is a lot of new regulations that make it harder for pain patients to get the medicine they need. We also don’t need more laws to punish people for having a drug problem. We don’t need more drug testing to throw addicts off of public assistance. Most of all we don’t need the hysteria that results from the hype and actions of politicians over these drug epidemics. We need to use common sense. In the 1980s we filled the prisons with people whose only crime was having a drug problem. Such laws created problems we are still trying to fix today. Recent statements and actions by our President Donald Trump make no sense at all, such as capital punishment for drug dealers. We need cooler heads and people who have common sense working on this epidemic and not reckless politicians. 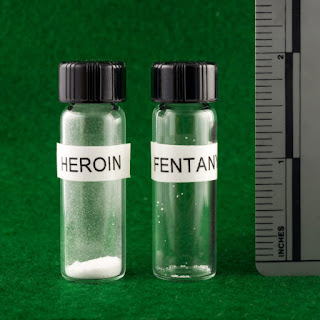 Pix by Why fentanyl is deadlier than heroin, in a .