The Koch brothers, David and Charles, with their sprawling networks, are now getting pretty much everything they ever waned in our government, thanks to our Idiot and Chief Donald Trump. They have watched with delight as Trump destroys the environment one piece at time, but definitely he is on track to leave us in the dust. Workers or losing their rights all the time and the Koch brothers love it. They love to see our workers graveling and begging their bosses for the most mundane rights.  They can’t stand to see workers controlling their own fate.
The Koch brothers are among the most dangerous men in the country today. They are fighting any action on global warming. They want to cook our planet and steam it up with industrial sludge.
-SJ Otto
Here is an AP article on the brothers:

By Lisa Mascaro, AP Congressional Correspondent
The sprawling network funded by the billionaire Koch brothers is having a very good run with President Donald Trump in the White House and Republicans in control of Congress.
Tax cuts are now signed into law. A conservative judge is seated on the Supreme Court. And many governmental regulations, including those on labor and environmental practices, are facing rollbacks.
That success is starting to get attention. Democrats are increasingly questioning how far the network's influence extends into the White House, casting the groups' backing by industrialists Charles and David Koch as puppeteers behind Trump's agenda and hoping to rouse their own donors to fight back. The network in turn is ratcheting up its focus on areas where it aligns with Democrats — most notably immigration legislation — and reviving calls for bipartisanship.
"We've come off one of the most successful years in our network's history," said James Davis, executive vice president of Koch-backed Freedom Partners and a spokesman for the
Seminar Network, the broader organization of groups and donors. "And we're going to turn up the heat on both parties to drive forward."
For the rest click here. 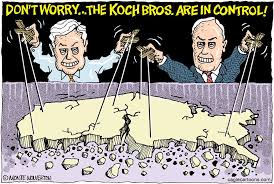