In their efforts to placate their supporters, the Kansas Legislature approved a parents' 'bill of rights.' This allows a parent to challenge materials that teachers use in our class rooms. This is a very dangerous law that, if enacted, might run some teachers off the schools entirely.

So far Gov. Laura Kelly will probably veto this bill. If it does pass it will wreck havoc on our educational systems.

There are some parents out there with very strange ideas and to challenge everything their children are tough could reap some real problems.

According to The Kansas City Star:

"Republican candidates statewide have based campaigns in the past year on parental anger over COVID-19 restrictions and a wave of conservative criticism over how schools teach children about difficult issues including race and sexual orientation."

So Republicans here in Kansas and across the country, want schools to reflect THEIR values ​​on COVID-19 paranoia, they want to cover up this country's racist past and they want to prevent any kind of discussion on homosexuality or related issues. In a nutshell they want to control what teachers say and how they teach. They are trying to prevent any liberal views. They want their far right values ​​taught. Again from The stars:

"Kansas Attorney General Derek Schmidt, the presumptive GOP nominee for Governor, has already focused much of his campaign on the issue. In a Twitter post last week the Republican Governor's Association called Kelly's statement evidence she would side with “the liberal teacher's unions funding her campaign"rather than parents."

He makes no attempt to hide the fact that he is against liberal teachers and he is anti-union. He complains that Kelly gets support from teacher unions. He overlooks how much money he and other Republicans get from conservative groups and businesses. He attacks corruption on the left, while ignoring it on the right.

Y no! most parents do not have the money to support his campaign, but many businesses and organizations do.

According to The Kansas City Star , there are some serious dangers in the bill:

"Sen. David Haley, a Kansas City Democrat, said he worried the legislation opened the door to the removal of important context for the uglier parts ofhistory, like racism and segregation, from classrooms. “I just hope we don't reach the point where we allow the involvement or cancel culture where we allow those 1 or 2, or 10 or 15 parents who are inspecting and being informed and able to have removed materials and discussions from within curriculum . .. limit the ability of children to really grow into a world citizen,”

We have reached a place in our times when arrogant right-wing politicians can dictate what all of us can learn in schools.

Some of the school complaints get from parents become absurd. A few years ago, a parent made the news by being outraged over a topless woman on a beach in Where's Waldo on the Beach?" At first it looked like she was angry over outright pornographic images. But later I saw that picture. The woman is on her stomach and nothing shows. She has her top undone, as many women do, to get a tan without the lines. It is less than an inch long and is almost completely unnoticeable. According to The Journal Times:

"It's very small, but the woman was definitely sunbathing topless," said Doug Rogers, operations manager at BJ's Wholesale Club, which pulled the Waldo puzzles from its shelves. "We responded seriously to the complaint."

Her complaint was ridiculous. The picture was completely innocent and removing that book was an outrage. The are all kinds of whack jobs who can come into a school and wreck havoc over some ridiculous argument over the kinds of materials students looked at.

We have reached a place in our times when arrogant right-wing politicians can dictate what all of us can learn in schools. 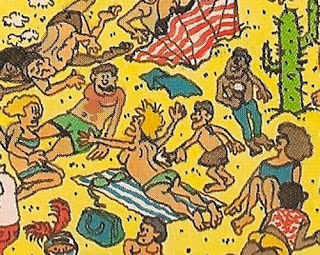 Pix (a blow up of a much smaller) from Reddit. 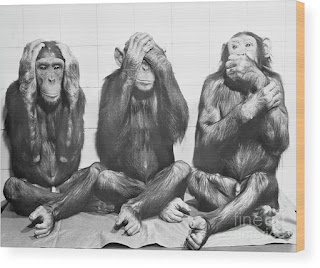