Democrats of met to chart out their future in the upcoming elections. The theme all night was to get people away from culture wars, which the Republicans were doing, and focus on governing Kansan’s people.

He and other candidates spoke to the audience who had met there for a fundraiser to help local democrats win, this last Saturday evening. Schmidt explained that he worked in the school system and never saw anyone teaching CRT. 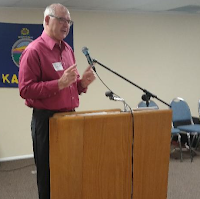 Kelli Grant is running for Sedgwick County Commission. She is concerned about the lack of workers for many of the counties programs. She said the programs are poorly funded and workers are not paid enough to keep.

“Some programs may be shut down due to a lack of funding and lack of workers,” she said. 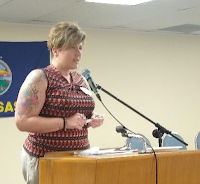 The Rev. Mark Holland is running for the US Senate.

“Let’s let the crazies go,” he said. "Don’t waist time with the crazy uncle who is convinced that Donald Trump won the election.”

He said The Democrats need to focus on their base supporters. Many Democrats say the vote in every election, but they mean the presidential elections.

“We need to get them to vote in primaries and the mid year elections, to elect representatives and senators,” he said.

continued the theme that people want work with dignity, not attacks on the public school system or attacks on gay rights.

“Roger Marshall has never voted to raise the minimum wage,” he said.

Democratic officials were surprised at the size of the crowd that came out that night. 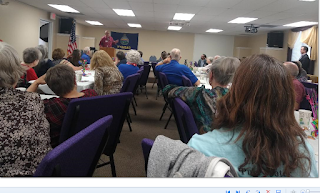