By SJ Otto
The national Democratic Socialists of America has decided to support divestments from all of ’s business investments and it pulled out of the Socialist International. These decisions were made at this year’s DSA conference in August. members of the group attended the conference and reported on this and other important decisions at the local Wichita DSA meeting here last Saturday.
As with most left-wing organizations, DSA is concerned about Palestinian rights. Support for their rights has become more main stream and more groups are opposing investments in for that reason. Also DSA has a lot of new members and the group has been steadily moving to the left in recent years, especially after the last Presidential election, where Bernie Sanders ran as both a Democrat and a socialist.
As for the Socialist international, Jim Phillips told member at the meeting the Socialist International has been moving towards neo-liberalism and really has little in common with a real democratic socialist party.
It was also announced that DSA documents are now available on line. To access them go to:
http://www.dsausa.org/search_results?cx=010903528041649108937%3Aosbcyc2c-68&ie=UTF-8&q=DSA+convention+documents&sa=Search
Or click on the above hyperlink.
A list of actions and positions taken at the national convention was read to the local group.
The local DSA group is planning a retreat for the end of September, possibly the 23rd. The details are not all worked out yet, but it will focus on organizing for the actions that DSA is planning to take. DSA’s next meeting will be October 7. More details will be provided by this blog as they are developed.
Other actions the group discussed include educational outreach, ways to educate people as to what socialism really is and how to reach public educational facilities.
A discussion was held on promoting socialist candidates. The group agreed we will all support Democrat James Thompson and Brandon Johnson, but we are not sure at what point we want such candidates to endorse us as a group since socialism is still a dirty word.
DSA will be supporting a $15 an hour minimum wage increase campaign. There is now some suggestion that a $13 an hour wage is more likely to get passed than $15.
A movie night is being planned for maybe the 30 of September, at 2pm. The planned movie is Union Maids. If that is not available then the movie Matewan will be shown.


Wichita DSA is working on making some shirts for members to wear. 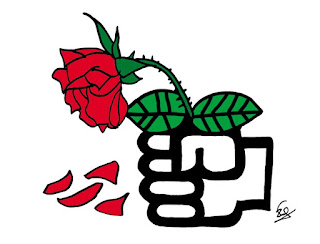 The Socialist International - Pix by Resistance Is Fertile -
Posted by SJ Otto at 8:47 PM