By SJ Otto
I first moved to Wichita sometime in 1980. One of the fist political activists I met was Mary (McDonough) Harren. She was the go to person involved in the local peace movement here in Wichita. Back in Lawrence where I came from, the big issue was the war in Latin America, supporting the Sandinistas in Nicaragua and opposing military aid to the government of El Salvador. Mary was involved in that also. She was involved in other issues, such as the movement for a nuclear freeze. We lost Mary last week to cancer. She was 91 years old. She lived a full life and was a major player in the anti-war, anti-imperialism movements. 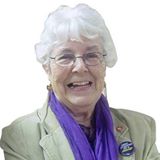 She was arrested several times for trespassing with people who were using civil disobedience against nuclear weapons. She was arrested in August of 1982 at Offutt Air Force Base, near Omaha.
She was a member of Democratic Socialists of America. She believed in socialism and a world where the needs of the common people were not more important than the needs of the greedy wealthy people who profited from making and selling weapons.
“The peace movement,” she said, “is holding out a vision, a hope of a better world for human kind, other than spending your life building arms, that this is not the most creative thing, that this is not what were meant to be doing with our lives, is to defend private or personal property at the expense of the rest of the world.”[1]
Mary and I have worked off and on with the peace group here in town (Wichita). The name has changed many times, but she stayed with it and so did I. Today we have the Peace and Social Justice Center of Kansas. I remember when they added on "social justice", several years ago, so we could work on some local social justice issues. Today’s Wichita peace group is located in the house that used to be Mary's.
I used to visit that house when Mary lived there. Her, other friends and I would visit, drink wine and discuss foreign policy issues. Even before she turned it over the Peace and Social Justice Center, she had many political events there.
When I first met Mary, both of us were Catholics. At some point I got tired of the Catholic political shtick. Both of us had problems with many of the church’s positions, such as being anti-abortion and the churches’ position on Sandinista Revolution in Nicaragua. Eventually John Paul II came out strongly against Liberation theology, which both of us supported. I finally had enough and dropped out of the religion.  She stayed in and refused to give her faith up.
She stood by her catholic beliefs, even when the local church did everything they could to dissuade her. The local Bishop of Wichita excommunicated her for supporting abortion rights. She was a member of Catholics for Choice.
She once told me "What are they going to do? Arrest me for going to church?"
Mary has been politically active going all the way back to the Vietnam War. Other issues she has taken on include speaking out about the use of the atom bomb in Hiroshima. Over the years she has worked with The Catholic Worker, Pax Christi, Women's International League for Peace and Freedom and Code Pink.  Mary raised seven kids and her husband Donald Harren died before I moved back to Wichita, in 1980.
Mary slowed down a lot as she got to her 80s and beyond. Still, she was always a part of the peace movement here in the Wichita area. She will be missed. 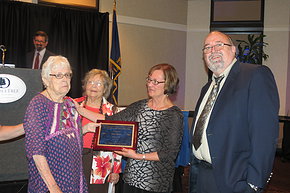 Mary accepting a reward from the Global Learning Center.
Pix by //www.globallearningcenterwichita.org/

Thank you for this. I have been wondering about my old crowd in Wichita and have done a few google searches over the years.

The contract includes $600,000 in guaranteed money.Inside linebacker Mark Barron (St. If you decide to access any Linked sites, you do so at your own risk. The Prince home was rented by the late Minneapolis based singer from basketball star Carlos Boozer.

He noted that until now, inspectors general have largely felt protected to conduct independent oversight of government wrongdoing unless there was some evidence they engaged in misconduct."This president has now changed the game," Bromwich added. Fauci once dismissed concerns about carriers of coronavirus.

This policy is just one more example of a school or district employing the CYA strategey in order to overcome the public's perception that this school is failing. About the change, while I am putting Coach Outlet Clearance finishing touches on my collection. It was impossible to tell off the pre game line rushes.

The body carries wisdom in it and usually knows what is best for us. Sign up to FREE email alerts from Mirror daily newsSubscribeWe will use your email address to send you newsletters. "But for me, I had to make sure it was true. Dans la plupart des cas, ces renseignements ne sont pas des RP mais plutt des Donnes de navigation, et nous vous renvoyonsla sectionDonnes de navigationci dessous pour mieux comprendre notre politiquece sujet..

For more than 30 years, Mobilians have been able to eat lunch Jordan Shoes For Sale Bienville Square, the oak shaded oasis in the heart of downtown, while Cheap Yeezy Shoes Sale enjoying spring and fall performances New Air Jordan Shoes by some of the area's finest musicians. Cheap Nike Air Force 1 I said (to a staff member): I don like that cough I can tell Yeezy Shoes For Sale that not Air Force 1 In Store a cough that Eryn MK Outlet has ever had before..