Bob Dole was an honorable adversary

Make no mistake about it—Bob Dole and I were adversaries. We never agreed on anything. He was a Republican and one of the enemy. And maybe I’m getting older, but I’m able to make peace with some of my adversaries. Like it or not, I have a certain respect for Dole. Maybe it is the same as with Vern Miller. We were enemies. But even enemies can come to terms with each other. Dole had died. He was very old, he died at 98.

He was an old time conservative, one who was able to reach across to the Democrats when they could make a deal. Today there are very few deals. Compared to the Republicans of today, Dole is a radical liberal. He was very conservative, but not as the loonies we have today. 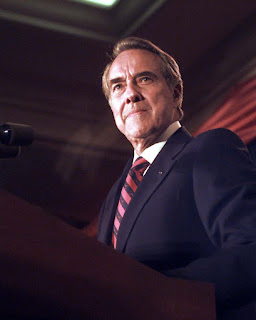 Compare him to Donald Trump and it is like comparing apples to oranges. Trump is not just a conservative—he’s a political ass and a buffoon. As with his present day party, he lacks any moral standards. He bragged about grabbing women by the crotched and even religious evangelicals overlook that outrageous behavior. I never knew Dole to do anything like that.

So while I commit heresy by saying anything nice about Dole, I have to admit there was a time when conservatives had a sense of fair play and could actually make compromises. Today we have a polarized system with centrist on one side and ultra conservative loonies on the other. There are a few progressive Democrats, but they have yet to reach critical mass.

So I honor former Senator Bob Dole. He was an honorable adversary.

Over the years I’ve learned to appreciate Dole as a statesman who at least knew how to behave in a civilized manor.