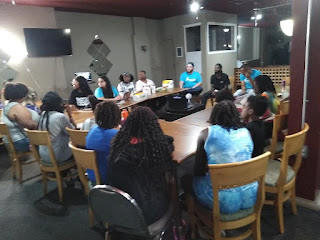 Last Thursday about 50 people showed up for a discussion on fines and the criminal justice system. The event was put on by Progeny.

The audience was more than half Afro-Americans. That is probably because there seem to be a consensus that the US Criminal Justice System is very racist and holds Afro-Americans back.

On the ideas being discussed:

People of color, and poor people in general, get trapped in the system. The use of heavy fines causes many people to end up in jail, often do to a lack of having a decent income for them to pay off the heavy fines. Those heavy fines where a major concern of the people at this discussion.

“We don’t know what they do with this money,” a young boy said. “It doesn’t go back to our communities.”

It was also pointed out that the US Criminal System became more repressive after slavery ended. Some of the intent of our laws are to create cheap labor for those who  used to be slaves and it is a method of control.

Some people suggested this state and country needs to up the age of the juvenile classification[1] from 18 or 21 to 25. The idea is that young people in their early 20s do things that older people would not do. They act more like juveniles than adults.

DUI divergence is as racket. The person has to pay thousand in fines to keep their record clean. This is another part of the fines that keep poor people poor.

There was some in attendance who pointed out that incarceration just doesn’t work. Those long sentences keep people from any normal life for years at a time. And they don’t really prevent a person from committing more crimes. They may even encourage further crimes since it makes it hard for a person who has been in the system to get a legitimate jobs.

I was told that many of the people present really believe they can get the support they need to change at least some of the problems and inequities in the criminal justice system.