No little green men—but maybe life in our Solar System

Once again we look at the world of physical science-

When I was a little kid I began reading about outer space and the planets. I read some fiction and lots of non-fiction books about planets. One interest I always had was to find life on planets. The best place to look for life was on Mars. The second best was Venus. I found lots of fiction that portrayed intelligent beings from both Mars and Venus.

Today we know that Mars may have microbes living underground in some parts of the planet but as much as us Earthlings have explored Mars, we still don’t know if there is any life there. We do know that there is no intelligent life—that is to say no Martians or people. And Venus may have some microbes in its clouds, but not on the surface. That surface is a furnace of almost 900˚ degrees. Not much chance of any life on the surface and there is definitely no intelligent life—no Venusians and no people. Scientists tell us there are no intelligent beings anywhere in our solar system.

Here we have a comparison of the Earth to the moons discussed in this article.

The life that may be there is either microbes or simple things, such as worms or fish. While there are no intelligent life forms in these oceans, finding any kind of life will tell us if we can expect to find life elsewhere in the universe.

From PNAS, by Adam Mann”

“Sometime in the early 2030s, a washing machine-sized robot could be carefully descending toward the icy crust of Jupiter’s moon Europa. Armed with cameras, a spectrometer, a microscope, and a scoop, the vehicle would be lowered from a UFO-like sky crane similar to the one that delivered the Curiosity rover to Mars. As the robot nears the frozen ground, its autonomous navigation system may have to take evasive action. “Maybe the surface is nice and flat and smooth,” says Curt Niebur, a program scientist at the National Aeronautics and Space Administration (NASA) headquarters in . “But maybe it’s covered in penitentes, which are literally six-foot-tall ice spikes.”

So scientists are very interested in Europa, a moon that appears to be made largely of water. The moon is now believed to have a rock core, covered by an ocean and that is covered by a sheet of ice.

“Europa is thought to have a vast liquid water ocean beneath its frozen crust, a potentially perfect place to find extraterrestrial organisms. The Jovian moon is merely one of many similar locations. In recent decades, exploratory spacecraft have revealed that our solar system is chock full of icy ocean worlds. Along with Europa, there are Saturn’s moons, the geyser-spewing Enceladus, and the methane-filled Titan. Then there's ’s cryovolcanic Triton and the distant dwarf planet Pluto, just to name a few. “You throw a stone, and you find another ocean world,” says planetary scientist Francis Nimmo of the of , . “They’re all over the place.”

“Scientists have yet to understand these strange ice balls’ surface processes or internal compositions entirely, and NASA and other space agencies are interested in further investigating their secrets. Last year, NASA started putting together an Ocean Worlds program; the earliest targets will be Europa, Enceladus, and Titan, which have the best evidence for liquids on or near their surfaces. Within a couple of decades, these places might tell us if life is widespread in our solar system, and perhaps elsewhere.

So the little green men and such forth that I imagined don’t really exist here in our Solar System. But even a bacteria or a worm would bring me interest. That would tell us we are not alone in the Universe. For me that is a lot. 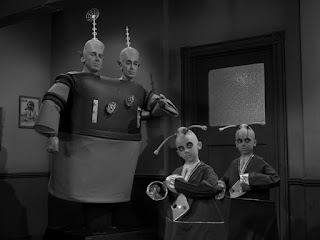 At one time people imagined all kinds of intelligent beings or even people on Mars and Venus. Here is an example of a two headed Martian and two small Venutians from a Twilight Zone episode. That show had a few episodes with Martians and Venutians. This episode was The Twilight Zone Episode 55: Mr. Dingle, the Strong - Midnite Reviews.