As Trump is sworn in—the nation is deeply divided

By SJ Otto
I'm glad to see all the planned protests against the Donald Trump inauguration. I am also glad to see all the Democrats and Celebrities who are planning to boycott Trump's swearing in. This country is more divided than it has been since the Vietnam War. It needs to stay that way. The Republicans have learned how to win elections. Now they are poised to attack every government program that that poor people and poor working people need to survive. That is evident as the Republicans in congress get ready to end Obamacare (Affordable Care Act or ACA) and pull the rug out from under 18 million people who presently have access to health care. They will also take away the Medicaid expansion that many poor working people rely on to stay healthy and ALIVE.
The attacks don't stop there. Women's rights are under attack. And racist of every stripe are strutting their stuff, with the idea "this is Trump country now." They feel free to spew their racist venom with delight.
It is not just redneck working class rubes spreading the hate.  Consider what  Maine Gov. Paul LePage said just recently. According to the Portland Press Herald:

"Maine Gov. Paul LePage said Tuesday that the NAACP should apologize to white America, making the comment just hours after he weighed in on the president-elect’s Twitter beef with a black civil rights icon.
But the governor rewrote American history when he misrepresented events surrounding racial segregation in the South.
“I will just say this: John Lewis ought to look at history,” the Republican said during his weekly appearance on the George Hale and Ric Tyler Show on Bangor-based radio station WVOM. “It was Abraham Lincoln who freed the slaves, it was Rutherford B. Hayes and Ulysses S. Grant who fought against Jim Crow laws. A simple thank you would suffice.”
LePage’s version of history erred on two key points. Historians say that Jim Crow laws didn’t exist during the Grant administration, and that Hayes’ presidency set the stage for the creation of Jim Crow laws.
The governor’s criticism was aimed at Rep. John Lewis, a civil rights leader and Democratic member of Congress from Georgia, who announced Friday that he wouldn’t attend Donald Trump’s inauguration and said, “I don’t see this president-elect as a legitimate president.” Trump answered Lewis on Twitter, saying Lewis was “all talk, talk, talk – no action or results. Sad!”.....
......LePage, later trying to clarify his references to presidents Hayes and Grant, said the NAACP was casting all white Americans as racists. It’s not clear why he referred to the NAACP in his criticism of Lewis, who was a founder of the Student Nonviolent Coordinating Committee in the 1960s, not the NAACP.
“The blacks, the NAACP (paint) all white people with one brush,” LePage said. “To say that every white American is a racist is an insult. The NAACP should apologize to the white people, to the people from the North for fighting their battle.”

LePage is typical of the kind of Republicans that are winning elections all over this country. His actions are destructive to the common working man and especially the working poor. He is typical of the backward, right-wing, repugnant and disgusting bullies that have crawled out from under their rocks to poison our political Climate. His remarks are so blatantly racist it is remarkable that he is able to stay in that office. When elected politicians like him can get away with such blatant racism, it is no surprise that fringe people on the far right believe their time is here at last.
It is no wonder that more than 60 Democrats plan to boycott Trump's inauguration. We all need to let Trump and the Republicans know that we may not be able to stop him from taking office, but he will be at war with us his entire term. 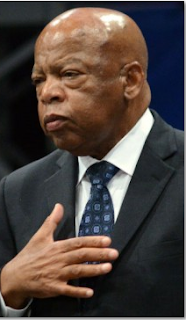 Pix from The Hill.