To Mike Pompeo—we call it imperialism, not liberty or freedom

US Representative Mike Pompeo (R) is probably the most pro-imperialism representative I have ever lived under. He supports everything from NSA spying on US citizens to sending combat troops into Iraq and Syria.
A few times a month I get a newsletter from Pompeo and about half of them are about his relationship with veterans. He is always bragging about the support he gives to vets. In the latest letter he brags about his support of an “appropriations bill”[1] that provides increased benefits for veterans. I don’t oppose spending money on veterans because they have been doing all the dirty work in foreign affairs and they are the ones who lose limbs are lost and they suffer physical and mental damage defending the property and investments of our conservatives.

“I understand the dedication and sacrifice it takes to defend our freedom,” Pompeo said in his recent newsletter.   But does he really know what it is like to serve in times of war? Pompeo has attended the U.S. Military Academy and he has served sometime in the military. But, he has not actually been in a battle. It is easier to support the military from behind the front lines supporting appropriation bills and military spending, but the vets are the people who actually get down in the trenches and do all the fighting. That means they take all the risks and politicians such as Pompeo like to chum around with them, without having to go into battle and risk getting hurt.

Again in his newsletter:

“That is why it is a special privilege for me to spend time with Kansas veterans.  Last week I met members of Kansas Honor Flight No. 24 at the Wichita Eisenhower airport as they departed on their trip and again when they visited the Vietnam Memorial in Washington, DC.  Kansas Honor Flight arranges these experiences and sends our veterans to Washington to visit their own war memorial.  These memorials exist to proclaim that the liberties we enjoy today were earned through the bravery and sacrifice of many patriotic American soldiers.  It is always such a blessing to meet these heroes.  And great fun.”

While this may be great fun for the representative, he is not the one making all the “sacrifice” and “bravery” for the so called “liberties we enjoy today.” And just what “liberties” are they sent to defend?
One of the biggest lies perpetuated by our political establishment today is that “our military is fighting for our freedoms.” They “defend us while we sleep at night.” “They defend the liberties that we take for granted” But this is all BULL SHIT!

The real prize there is oil. With the US in control of Iraq, it also controls the oil shipping through that part of the world. Major oil fields are under US control now. There are other resources and advantages in the middle-east as well. In Iraq there are minerals and natural gas.
People in America do not have the freedom to decide what kinds of chemicals we can put in our bodies; as we can be arrested for possessing small amounts of drugs. Outspoken people risk being the victims of smear campaigns by organizations or “think tanks” owned by wealthy persons such as the Koch brothers.
Then there are those god-like powers a country hungers for. They produce such actions as regime change and nation building. This is all a part of the process called imperialism. We strive to build a massive empire where the nations under our control are like our back yard. The land may have people living in it, but we feel as if that land is really ours. We treat the people as if they are our children, who need our wise guidance.
Imperialism is the real aim of our military today. We aren’t fighting any wars here at home, with the exception of a few acts of terrorism.
There have been some risks of terrorist actions, but they can be traced to our involvement in the middle-east. Despite all the warnings that ISIS wants to attack us here at home, only one such attack has taken place since 9/11. In reality the fight is in areas in and around Iraq and Syria not the US. ISIS took over parts of Iraq months ago with an ambitious plan to annex most of that country. The US has invested heavily in a puppet government set up to imitate the “democracy” of the US.
Pompeo is nothing more than a stooge for the US military industrial complex. We need to let him know we are not fooled by his adoration of the military. This is about imperialism and not about liberty or freedom. 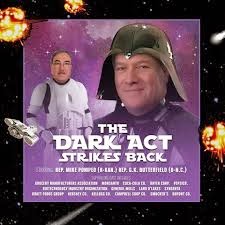 [1] In total, the legislation provides $76.6 billion in discretionary funding – $4.6 billion above the fiscal year 2015 level. This represents a 5.6 percent increase over the fiscal year 2015 level for the Department of Veterans Affairs (VA) – including increases for health care, benefit claims processing, the Board of Veterans Appeals, medical and prosthetic research, and information technology.
Posted by SJ Otto at 1:56 PM